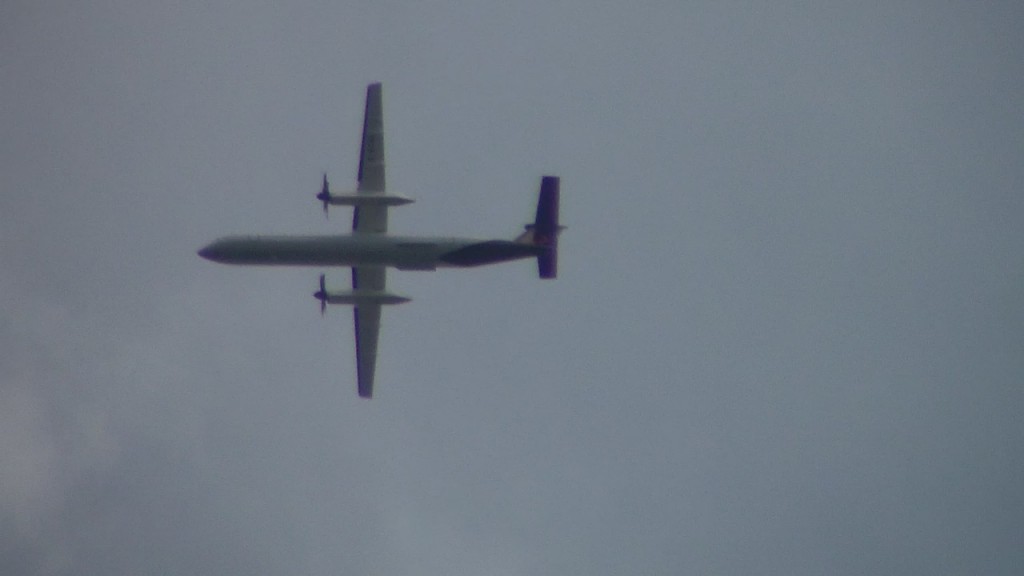 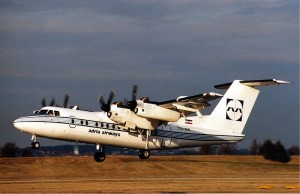 The de Havilland Canada DHC-7, popularly known as the Dash 7, is a turboprop-powered regional airliner with STOL capabilities. It first flew in 1975 and remained in production until 1988 when the parent company, de Havilland Canada, was purchased by Boeing and was later sold to Bombardier. Bombardier sold the aircraft design (type certificate) to Viking Air in 2006.

In the 1960s, de Havilland Canada was already well known worldwide for their series of high-performance STOL aircraft, notably the very popular DHC-6 Twin Otter. However, these aircraft were generally fairly small and served outlying routes, as opposed to the busier regional airliner routes which were already well served by larger, higher-performance turboprop aircraft such as the Fokker F27, Fairchild F-27, Convair 580 and 600, and Hawker Siddeley 748.

The de Havilland Canada company felt they could compete with these designs in a roundabout way. With their excellent STOL performance, their designs could fly into smaller airports located in city centres and smaller, outlying, more austere airports having runways that the other aircraft could not easily use (unpaved, unimproved). The original specification called for a 40-passenger aircraft with a fairly short range of 200 statute miles, operating from runways only 2,000 ft long (610 m).

With new noise restrictions coming into effect throughout the 1970s, an aircraft tailored for this role would also have to be very quiet. To meet this restriction, the new design used oversized propellers geared to spin at a slower speed than normal; much of the sound from a propeller is generated at the tips which are spinning near the speed of sound, and therefore, by reducing the number of RPM, this noise is reduced substantially. The Dash 7 often landed with only 900 rpm, and took off at only 1,210.

In other respects, the new DHC-7 was essentially a larger, four-engine version of the Twin Otter: the general layout remained similar, with a high aspect ratio high-mounted wing, most details of the cockpit and nose profile. Changes included the addition of cabin pressurization (requiring a switch to a fuselage with a circular cross-section), landing gear that folded forward into the inner engine nacelles and a large T-tail intended to keep the elevator clear of the propwash during take-off (the Twin Otter’s empennage was a cruciform arrangement).

The Twin Otter incorporated “flaperons” that drooped the ailerons as part of the flaps, but these were not included in the Dash 7 due to weight and complexity. Instead, the ailerons were reduced in size to allow more flap area, and were augmented with two sets of roll spoilers, or “spoilerons“: the inboard roll spoilers operate at all speeds while the outboard roll spoilers only operate at speeds less than 130KIAS to allow for more roll control at slower speeds. Upon touchdown, both the inboard and outboard roll spoilers extend in unison to aid in destroying lift created by the wing. Each wing also includes two ground spoilers which only extend on touchdown. Most of the trailing edge was spanned by a complex double Fowler flap arrangement for high lift at low speed. During a typical STOL landing, flaps would be selected to the 45° position; this flap setting allowed for steeper descents and slower approach speeds. Depending on weight, the VREF speed with flaps at 45° would be between 70-85 knots. On touchdown, through “squat switches” in the main gear, the flaps would automatically retract to the 25° position and thus reduce lift once on the runway for better braking performance. The flaps would also retract to 25° when engine power was increased during a go-around procedure. The four-engine layout aided lift at low speeds due to the wide span of the propellers blowing air over the wing (“propwash”). When reverse thrust was selected on landing, the props reverse pitch, push air forward and slow the airplane effectively along with the anti-skid wheel brakes. More importantly, if an engine failed, the asymmetric thrust was much less than on a twin-engine layout, thereby increasing safety and allowing for a lower minimum control speed with an engine inoperative (VMC). Development started in 1972 and the prototype first flew on March 27, 1975. Testing went smoothly, and the first delivery took place to Rocky Mountain Airways on February 3, 1978. The Dash 7 enabled Rocky Mountain Airways to operate scheduled passenger air service from Denver into the Avon STOLport in Colorado which was controlled by the airline. The Avon STOLport was located in a mountain valley in close proximity to the Vail ski resort. Another close-in ski resort airfield served by Rocky Mountain Airways with Dash 7 flights from Denver was Steamboat Springs Airport in Colorado. With a relatively short runway length of 4,452 feet and an airfield elevation of 6,882 feet, the Dash 7 was well suited for operations from this airport located in the Rocky Mountains.

The original Series 100 represents the vast majority of the aircraft delivered, and came in two models; the -102 passenger version and -103 combi with an enlarged cargo door. These were followed by the Series 110 which met British CAA requirements, including the -110 and -111, and finally the Series 150 which included additional fuel tankage and an improved interior in the -150 and -151. There were plans for a Series 200 with the new PT6A-50/7 engines which improved hot-and-high power, but these plans were shelved when Boeing ended production of the design.

The mixture of features on the Dash 7 met with limited commercial success. Most turboprop operators used them as feederliners into large airports, where the STOL performance wasn’t considered important. In comparison to other feederliners, the Dash 7’s four engines required twice the maintenance of a twin-engine model, thereby driving up operational costs. Finally, those airports that did require a high performance STOL operation were generally small and well served by the Twin Otters; had the airport needed a larger plane to serve its customer base, they would have built larger runways. One exception to this was operations at London City Airport which, upon opening in 1987, was capable of handling few other aircraft types besides the Dash 7 due to its relatively short runway as well as steep approach.

The Dash 7 also gained a number of military orders. The first of these was for two aircraft for the Canadian Armed Forces, who needed them to transport high ranking passengers and freight around Europe. These aircraft received the CF designation CC-132 and were delivered to No.412 Squadron at Lahr, in West Germany.

The United States Army operates several Dash 7 aircraft as surveillance platforms with the designation EO-5C (RC-7B before 2004) under the Airborne Reconnaissance Low program.

Transport Canada operates a single DHC-7-150IR aircraft to conduct maritime surveillance, pollution and ice patrols as part of the Transport Canada National Aerial Surveillance Program (N.A.S.P.). The aircraft’s home base is Ottawa, Ontario, Canada. During the summer months this aircraft conducts patrols throughout the Canadian Arctic, Alaska and Greenland. During the fall and winter months this aircraft conducts patrols of the Great Lakes and east or west coasts of Canada as required.

The design of a much more “conventional” twin-engine design commenced at de Havilland in 1978, resulting in the extremely popular Dash 8. The DHC-7 production line eventually delivered 113, of which six have been lost and one scrapped. Many of the rest remain in service.

The de Havilland Canada DHC-7 has been involved in six accidents (and 10 incidents overall) with a total of 68 fatalities. The BAS Dash 7 at Stanley on the Falkland Islands.

The British Antarctic Survey (BAS) operates a single Dash 7 in support of its research program in Antarctica. The aircraft undertakes regular shuttle flights between either Stanley on the Falkland Islands, or Punta Arenas in Chile, and the Rothera Research Station on Adelaide Island. It also operates to and from the ice runway at the Sky Blu Logistics Facility on the Antarctic mainland.

A single DHC-7 150IR is owned and operated by Transport Canada conducting coastal pollution and ice patrols across the Canadian Arctic.